Each year Kerri and I like to sit down and spend a little time reflecting on how the year went, the highs and lows.  This discussion generally proceeds a separate one discussing what we would like to accomplish the following year.  I thought it would be a fun exercise to write about this on the blog for future reference.

In order of importance, this is how I want to remember 2009:

Although she, my first child, was born at the end of 2008, I really associate the first year of her life with 2009.  What an experience.  I always knew that I’d love my children the same way that my parents loved theirs but I could not have imagined what this year has been for me. 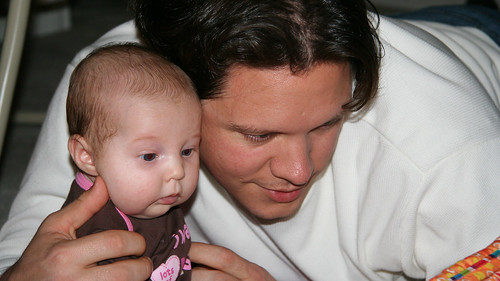 I’ll always remember how fast she changed despite us trying to slow it down and capture every moment.  From a distance, a child’s first year seems pretty simple.  They don’t do much, they cry a lot, they double in size and look different.  But from a Fathers viewpoint, seeing the changes everyday, I can understand now what the miracle of life is.  There are so many little details which are constantly changing.  Everyday of her life brings excitement with the anticipation that she might surprise you yet again by smiling at you, then maybe laughing in reaction to you, or finally repeating the word “da da” (which brought tears to my eyes).  Just this past week she leaned forward, lips pursed, to give me a kiss before heading out for work.  It doesn’t get any better than that.

I remember my first business trip away from her fell on Saint Patrick’s day.  Kerri dressed little Faith up in a special outfit and emailed some pictures she took.  I can vividly remember sitting in the corporate apartment around midnight, finishing up some last minute coding for a project, checking my email and seeing the photos.  I’d never felt so far away yet still so happy be a Dad. 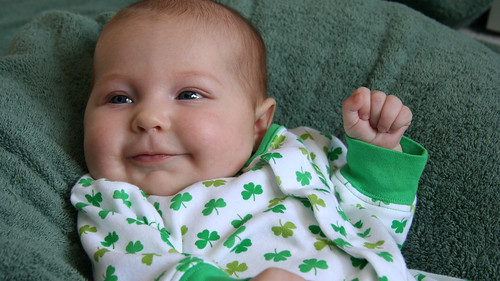 I think the biggest surprise this year has been how much I’ve learned from her.  It sounds a little ridiculous, but understanding how important it is to have a consistent schedule, the right nutrition, and enough sleep.  Without those things she is going to let you know how unhappy she is.  I think after 32 years I figured that I could get away without those things because, well… I am an adult dammit!  I learned that we aren’t all that grown up when it comes to life’s necessities.

Finally, I’ve sensed welcome changes in myself related to having a true dependent who I know is counting on me to provide food, shelter, love, guidance, and warmth.  There is a great sense of pride with a sprinkle of fear that comes with knowing this.  I’ve begun making behavioral changes for the better because I know how quickly she absorbs what she sees us doing on a daily basis.  The way I live my life is going to have the most positive (or negative) impact on her above anything else I say or do.  I want to live to my potential more than ever so that she may one day live to hers.  What higher motivation can there be?

Last, (I know the last paragraph was suppose to be the last, but it’s my blog!) this past year has also opened my eyes to just how important family is.  People who know me well know that I spent my 20’s wishing I were living somewhere else… not in Round Rock, USA.  It wasn’t that I didn’t like my family, I did, it was just that I wanted to see the world… or at least something different.  After this past year I’m glad they are so close and I look forward to spending more time with them.

It’s no secret that work took a backseat to family this year.  However, we work pretty hard at @hand so in a normal year I was still able to accomplish quite a bit.

First, in the great recession of 2009, I was able to stay fully employed.  I survived a few cut backs, but if anything, I think this strengthened my value proposition at @hand.  Being employed is something many take for granted during the good times but I was laid off for 3 months in 2001 during the aftermath of the tech bubble.  I know what it feels like to get that call (a sinking feeling like a record needle scratching off the side), to have little opportunity, and to take that B job you didn’t really want.  I’m thankful for the opportunity that I have to be a contributor.

The following projects were completed in ‘09:

It’s a bit comical, but after reviewing my 2004 Goal notes I listed weight management as a top priority.  Kerri tells me that I’ve always been about the same weight since we met (avg. around 195 lbs) and that I’ve always wanted to weight 180lbs.  Well, I didn’t accomplish that in 2009 either!

The year started off right because I was following a new running workout.  I competed in the @hand Challenge (a company running event) at the Capitol 10K where I set a 10K PR of 56:54.  My training notes show that I weighed in at around 199 for that race (not great) on March 29th.  I distinctly remember joint pain and then the sweltering heat wave this summer breaking my running routine shortly after this.

Over the summer, I don’t know why I didn’t do anything, but I slowly packed on the pounds from a high base of 199.  By the fall of ‘09 when we took a family trip to Florida, I set a new personal high of 207lbs and was in pretty bad shape.  I was really upset about this and decided that I needed to make some changes.  This was the first time that I could remember being over 200lbs and not immediately doing something to get back under 200.  It is a scary thought but it’s almost like I started to accept it.

Shortly after returning from that trip, on October 19th (from my notes!) I began a new resistance training routine.  I decided that I was too heavy to jog and that I needed to rebuild muscle that I’ve lost due to a sedentary job and lifestyle before starting any endurance training.

On the positive side, while I’ve lost no weight (205 this morning), I have faithfully stuck with my weight training program and my clothes fit better.  I’m stronger than I’ve been in years and more prepared to attack a new training program in 2010 (more on that in a 2010 goal setting post).  This is the best foundation I’ve had entering into a new year in a while.  I really do feel well.

2009 wasn’t the best year for fitness but I finished strong with excitement for what lies ahead.

Kerri and I, before kids with dual income (dinks!), spent the majority of our discretionary funds traveling and seeing the world.  While we pulled back this year and didn’t travel internationally, we where still able to travel with Faith, see friends, and hit the beach.

Our focus this year was to see friends, family, and do more things locally.  This was also the first time we were able to put together a vacation were all of our friends with kids could meet in one place and hang out.  The best example of this was the Jersey Shore in June where we met 3 other families.  It was a little cold but I really enjoyed it. 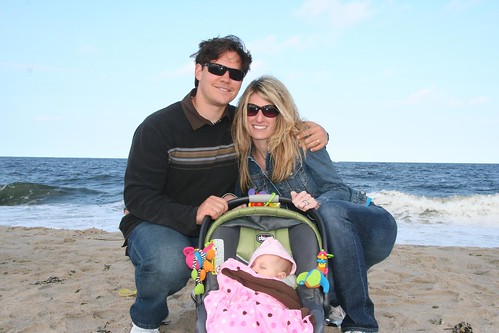 We also took trips to:

It’s getting late and I need to wrap this up.  You always do more than you think in a year and this turned out to be a really long post so I might try to cut it down later.  This one is for my benefit anyway.