It’s been a while since the last time I sat down to write anything.  I absolutely promised myself that I would write about my thoughts both before and after such a significant milestone as my first triathlon.  In many ways I have let off the gas since I ran the Capitol 10K in early April.  My workouts have been less structured, my weight-loss routine was put on hold, and my motivation levels fell off just slightly.  Could this be because I wasn’t writing or was that just another sign of getting too comfortable?  Comfort… I despise that word.  It means soft.  It’s the opposite of how I want to feel the night before a race.

The best thing I have going for me right now is that while I wasn’t training at a level 9 or 10, I have been consistently training at level 8 since the last race.  I haven’t regained any weight and I’m more than prepared to accomplish my goal of just finishing my first Sprint Triathlon.  I think that I could have finished the race and accomplished that goal 2 months ago and that has probably contributed to being content.

I started getting really excited during bike check-in today.  Ben (my triathlon buddy) and I went walking around the expo, meeting other triathletes, and scoping out the course for the first time.  It’s going to be an amazing day tomorrow.  I took a pic of my new bike sitting in the transition area with the Austin skyline in the background.  It feels weird leaving it there overnight, in a field, but there is no other way to execute a large race otherwise. 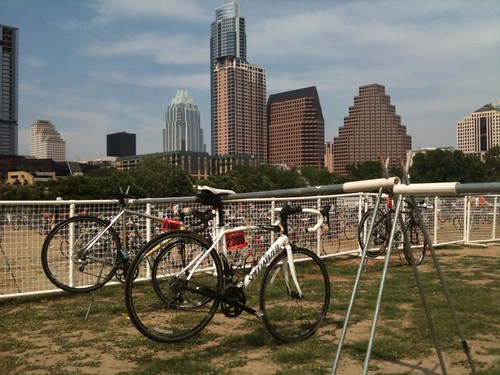 Enough reflection bullshit…  I want to tell a funny story and think about motivation for tomorrow.  In the 10K I remembered thinking that I was missing something all morning.  I was looking for some thought, some hook to give me a mental edge.  As fate would have it I ended up standing behind a group of guys who were running together as a team.  They were so organized that they even had bright green T-shirts printed up with the same quote on the back.

Before I give the quote, imagine me standing there, alone, searching for the motivation to kill it that day.  Then I looked up and the same shirt with the same quote was repeated a half-dozen times right in front of me.  The quote hit me like a ton of bricks and gave me the edge I had been looking for:

He who makes a beast of himself gets rid of the pain of being a man.  – Samuel Johnson

It spoke to me.  For the next 51 minutes I would turn into a beast so I could run wild and rid myself of the pain of being a man.  I smashed my previous PR by almost 6 minutes!

That’s the feeling I need to capture again in the morning.  If I can do that then I’ll have won.

Side note:  I did mention that this would be a funny story.  So unbeknown to me, and probably that group of guys wearing the T-shirts, that quote had nothing to do with the interpretation I came up with.  Samuel Johnson was apparently talking about drinking alcohol until you are so wasted that you forget whatever depressing pain you are having.  Go figure…  for my purposes I’ll stick with my original interpretation.  😉