It was a Tuesday night in Houston when I got a call from the CTO Mike.  He was also in town for work and wanted to do dinner and talk about a special assignment he had for me.  It had something to do with Jade Communications, an OEM partner of @hand, needing some help in the UK.

Over dinner Mike explained to me that Jade had two software projects to finish and they had requested some help getting them across the finish line.  Cool, so what’s the catch I thought?  He needed me to drive home to Austin the next day and be ready to fly out Thursday morning for 10 days.  This would be my first international business trip and an experience that I will not soon forget.  Looking back, I had no idea what I was getting into…

I should first mention that about 10 years ago when I was just a junior IT support person I had heard of consultants who would travel the world jumping from project to project.  Always something new, always a new challenge, never enough details, and I figured the best of them would thrive on this.  I remember wanting to be that guy one day who could be dropped into any situation, anywhere, and land on his feet.  I had forgotten about that idea until now.  So this whole assignment sort of satisfied this thought I had stashed away in the back of my mind for over a decade. 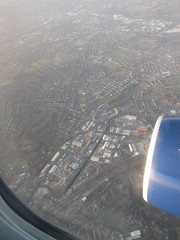 I really had no idea what to expect once I arrived.  I was told that they had two projects to complete but that one was almost finished and the other shouldn’t take the whole week.  In the back of my mind I figured they wouldn’t have shipped me over there if it was going to be easy so I did have reservations.

One thing I’ve learned is that the final 10% of a software project can take anywhere between 20-30% of the entire effort to finish.  It’s like you are literally wrestling a beast to the ground kicking and screaming… it just won’t die.

Within the first hour of starting, it began to sink in that I had just stepped into a dog fight and, for the first time, against 2 dogs.  It was time to roll up the sleeves and get to work or risk going home feeling defeated.

Over the course of the next 7 days I would put in 90 hrs of work according to my time snapper software.  TimeSnapper is a little app that sits in your systray snapping screenshots of the active window and compiling stats about how much time you spend in “productive” applications.

I set two personal records last week.  First, I recorded a 99% productive day.  This means that 99% of the 12hrs I worked that day the active window on my machine was considered a productive application like Visual Studio or Outlook.  A typical day would be 70-80%.  Second, I recorded a 21hr work day.  We worked from 8am till 5am the next morning, slept for 3hrs and made it into work by 9am.  It was just crazy…

I should mention here for my new UK friends and those responsible for sending me over there that I am not at all upset about the amount of time we put in, as a team.  The entire time I was working I knew that the work we were doing was appreciated and never expected.

There have only been a few experiences in my life where I can say I was tested to this extreme.  It’s just fitting that my mindset right now, due to the training necessary for my triathlon goal, is that people should test themselves occasionally.  A life lived too comfortably is a bland one.

In my past experiences being tested like this I always walked away feeling worn down but satisfied and happy if I knew I did my best.  Most importantly, for those who stood next to me “in the trenches” they will forever belong in a special group of people that are greeted with a hug and not a handshake.  There is something about extreme circumstances that peels away the layers of image we tend to build up to reveal the true character of a person.  It’s during these times that you learn a lot about yourself and those around you.

It was an opportunity, not a problem.  I have no regrets.

Despite the fact that I started this off talking about work, we did find some time have a little fun.  The Saturday I arrived I tagged along with Rebecca, her beautiful girls, and their nice friends for a day at the theme park Alton Towers.  It was just like going to Six Flags except that Alton Towers is built on the grounds of an 8th century castle and surrounding estate. 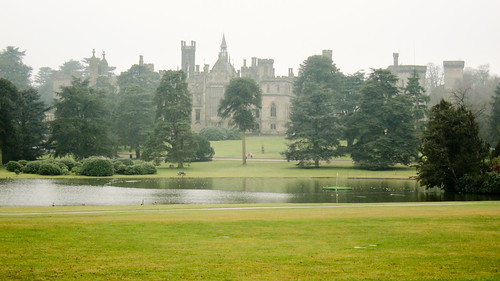 Here is a group photo with Me, Nutty the Squirrel, and Bec’s girls.  They were good sports and posed with me so I could have a picture with Nutty. 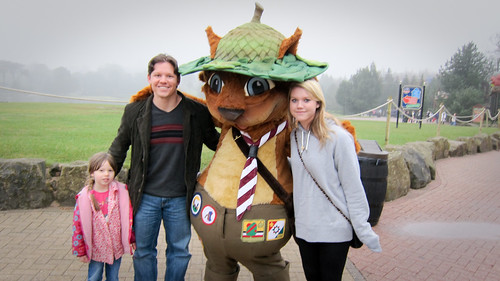 Each morning at the Pub I would sit down for an English breakfast and read their local newspaper scanning the headlines for later.  The most interesting topic of the week was Obama signing a National Healthcare bill into law.  This was international news and I got to read about it from the perspective of a country that has had national health care coverage, the NHS, since WWII.  The papers would mention things like “… the US is the only nation with a developed economy that doesn’t already have a national health care system…”.  I wondered if they thought we were uncivilized or something.

Over lunch and dinner I would ask questions about their opinion of the English NHS and the health care news back home.  Without a doubt, the most interesting realization I had was that they all felt that health care is a basic right and not just for the privileged.  This opinion was held strongly by people who would be paying a significant amount of tax as well as enjoying a premium plan offered through their work (ie. the exact demographic of people who strongly oppose a national plan here because they’ve “got theirs”).

I had to reconcile this attitude with the fact that complaining about the cost of NHS was a daily topic in UK newspapers.  I concluded that this is the result of speaking to people of a generation who were raised never knowing what it was like to not have an NHS and the associated lower taxes that would go with that.  You can’t miss what you’ve never had I guess.  They couldn’t imagine letting people go uninsured without basic care though. 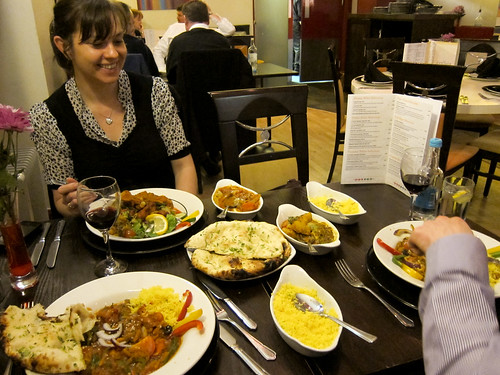 One of the better dinners we had discussing politics and relaxing was an Indian meal.  Indian food in the UK is awesome!  This restaurant was an upscale place and very tasty (and spicy).  I later learned that Indian restaurants are usually open late because it’s the preferred place to go at the end of a hard night at the clubs.  It reminded me of how we think of the 24hr breakfasts at Denny’s or IHOP.  Good times!

Interestingly enough, it was during this dinner that I asked what they would traditionally eat.  They both laughed and said “we don’t usually eat our traditional food”.  That killed my obligation to eat it too.  😉

There were a lot of other little stories and experiences that I don’t have the space to write about… if anyone is still reading this!

Looking back, now with a little perspective, I did have a great overall experience that I will always look back to favorably.  I worked a 90hr week, had some great meals and conversations, went to a theme park, made new friends, managed to stick to my diet and get in 4 workouts.

Sleep?  Who has time for that!